Beer is part of life and often a debatable part of nearly everyone’s diet. While beer has its health benefits, it’s not exactly a superfood. Plus, there are many reasons people believe that too much beer can give you a “beer belly”; after all, beer is heavy on carbs and nearly empty in terms of nutrients.

Drinking beer will not automatically result in weight gain, but it can lead to a poor diet.

Practicing healthy drinking habits is one way to enjoy a beer in moderation. These include considering the quality of the beer you’re drinking, how much you’re consuming and the frequency of your beer consumption. That means checking Miller Lite’s calories, researching on your favorite Corona Beer or making sure you switch to the light version of Busch.

Still, just because you’re drinking a lite version of your favorite beer, it doesn’t mean that you’re making a healthier choice than someone who drinks in moderation. It’s important to practice mindful drinking, which involves watching the amount you drink, as well as what you drink.

Fact: Not All Beers are the Same

Some beers are slightly higher in calories than others. Some also come with higher levels of certain nutrients. There are also beers that have less sugar. But since nutrition isn’t a black and white concept, comparing which beer is the best for your body can be tricky. Plus, there are lighter lagers available in your local supermarket!

Still, comparing the different types of beers can help you decide which is better for you. So, it pays to check the label. How many calories does Miller Lite have? Should you be drinking another brand?

Learn more about your options.

What is the Healthiest Beer You Can Drink? The Different “Healthier” Options

Here are the healthier alternatives to regular beer:

For a beer to be considered “low-alcohol,” it should contain less than 1.2 percent of alcohol. Another version called the ‘reduced alcohol beer means it has a lower alcohol content compared to the average beer.

Alcohol-free beer can also be beneficial for your heart. A 2009 study from the University of Valencia revealed that booze-free beer reduces the dangerous build-up of fat in the arteries, especially for people with high levels of unhealthy cholesterol. Also, alcohol-free beer increases your blood’s antioxidant levels, which offers stronger protection for your heart.

Although there’s no set definition of what a ‘low-carb’ beer is, a 12oz serving size of regular beer is 13 grams of carbohydrates. Low-carbohydrate beers tend to have two grams of carbs for the same serving size. The reason for this is that these low-carb varieties have been brewed to remove the carbohydrates, so it still has the same alcohol content, minus the carbs.

In terms of heart health, alcohol-free beer is the best option since reducing the alcohol content means reducing the calories. Low-alcohol beer is also a healthy choice since it has fewer calories — just make sure you don’t drink too much.

Is Lite Beer Bad for You? Or is it Better?

Another consideration when it comes to mindful beer drinking is the “lite vs. regular beer” discussion. Are light (or lite) beers better for you? Should you ditch the regular Miller beer and choose Miller Lite for the sake of calories?

Light beers are known for having fewer calories than regular beer. Apart from the calorie content, light beer also has different alcohol by volume (ABV) percentages. Regular beer has an ABV range of 4.1 percent to 5 percent while light beer’s ABV stands at 2.3 percent.

So is lite beer better for you?

Technically, it is a healthier alternative to regular high-calorie, high-ABV beer. The low-calories and low-carbohydrate nature of lite beer are bonuses. But on the downside, these encourage drinkers to consume more beer, thinking that “It is healthier, after all.” Plus, the low alcohol content of lite beer will not give you the sought-after buzz of regular beer, so you must drink more to feel its effects.

Light beer gives you the pleasure to enjoy an alcoholic beverage while keeping your health in check. If you want to stay healthy and still enjoy beer, drink quality beer in moderation.

Healthier Beers: What Beer Has the Lowest Carbs and Calories? 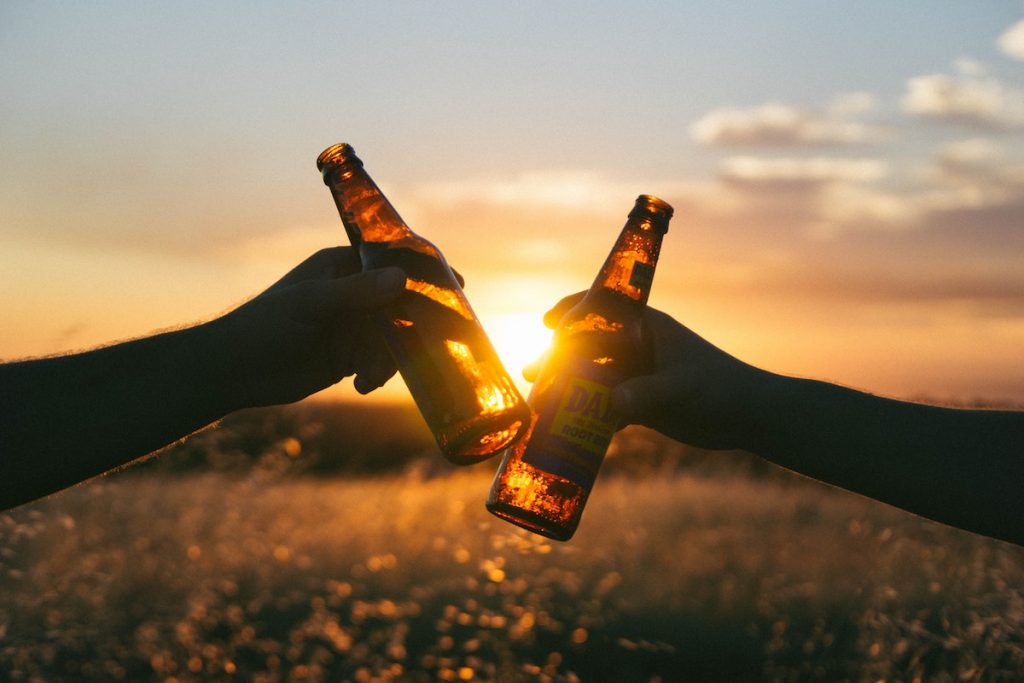 Miller Lite pairs well with any meal (fries, apparently, are its supreme best friend). Known as the OG “light beer,” this light, the golden-colored drink is one of the first popular beers brewed to be low-calories. A 12-ounce serving of Miller Lite has 96 calories and it contains fewer carbs compared to most beer brands — just 3.2 grams. It also has an ABV content of 4.17 percent.

Miller Lite’s low-calorie content makes it a guilt-free beverage enjoyed in garages, backyards and bars in the US. The best thing about Miller Lite is its low-calorie content doesn’t mean its flavor sucks. On the contrary, this lite version of the Miller beer doesn’t compromise on ingredients and flavor. It has a crisp, light and refreshing taste that goes well with any food (particularly, seafood hotpot!).

Budweiser Select 55 has one of the lowest calories: just 55! This drink from beer god Budweiser is a golden lager brewed with caramel malt. It is also known for its blend of aromatic hops, which is the reason behind the Budweiser Select 55’s distinctive taste.

Apart from the Budweiser Select 55’s low-calorie count, it has low alcohol by volume level (2.4 percent), which is two percent lower than the regular Budweiser Select (4.3 percent). In terms of taste, people have different opinions. But no matter what the taste is, if you’re looking for a beer-fix minus the calories, Budweiser Select 55 is your best bet.

Nothing is better than an ice-cold Corona on a summer day. Fortunately, Corona has a low-calorie alternative for beer enthusiasts looking for healthier options. Corona Lite has 99 calories and carb content of 4.8 grams. In terms of Corona Light’s alcohol content, it stands at 4.0 percent.

As far as low-carb beers go, Corona Light is the champion. Despite this Corona’s low-calorie and carbohydrate content, it has a delicious fruity taste and a wonderful citrusy aroma that goes well with anything, especially guacamole!

With this low-calorie drink and its fairly boozy nature, you can still enjoy your Busch without worrying about the calories and the carbohydrates.

The Coors brand is a standard when it comes to America’s love for beer. But for people who want to have their cake and eat it too (or in this case, have their beer and drink it too) without worrying about the calories, Coors Light is here to save the day.

Compared to regular Coors, Coors Light has 100 calories, which is 45 calories less than the regular one. In terms of ABV, it has 4.2 percent plus 5 grams of carbs. Fortunately, the taste isn’t an issue since Coors Light is smooth and goes well with most snacks. Just don’t forget to chill it!

Also known as Natty Light, this American-style light lager is known for being the Two-Buck Shuck of beer. It’s affordable, refreshing and light. Natura Light has 95 calories and 3.2 grams of carbohydrates, which is lower than other of Anheuser Busch’s low-calories brews (e.g. Bud Light). It also has an alcohol content of 4.2 percent.

Natural Light has a fruity taste that some like while others don’t. No matter what your preferences in taste are, however, Natural Light is the perfect drink for big barbecue parties.

Beer is a part of life and a part of almost everyone’s diet. There’s nothing wrong with enjoying beer, especially if you do it in moderation. One way to enjoy a beer in a healthy manner is to be selective with the beer that you drink. In doing so, you can have your beer and drink it, too.